JAN KEN PO GAKKO is a cultural and educational organization which operates a parent cooperative summer program to educate children about the enriched cultural heritage of Japanese-Americans. The program operates on the premise that children lives will be enriched by learning the history and traditions of Japan-Americans. This is done through the use of Japanese language, games, folklore, music, field trips and community interactions.  The principle function of the program is to provide the children with experiences to build their self esteem as Americans who have drawn upon the  rich cultural heritage of Japanese Americans.

JAN KEN PO GAKKO is a summer program which emphasizes that children have fun and enjoy themselves in learning about their cultural heritage.  The parent cooperative and participation aspect of the program ensures continuous parental input in program development. General meeting  attendance and committee participation is required to ensure that the parents are informed about the program and take part in the decision making  process.

The objective of the parent participation is two fold.
First, the parents learn about Japan-American history. Second, they can contribute their knowledge and experiences to the program.

The success of the JKPG program is based upon the role of the parents. Parent participation was built into the program to equalize the sharing of responsibilities among the parents. It also serves as positive reinforcement for the children to see their own parent actively in involved in the program. Their participation demonstrates the value of the program, role models as leaders and helpers, as well as reinforcement of the cultural experiences in the home.

Initially the summer program was held at the Parkview Presbyterian Church. Currently, a three week program for children, 5 to 12 years of age, is held Monday through Friday mornings at the Sacramento Japanese United Methodist Church, in Sacramento. The program curriculum consists of cultural themes that are aligned to each grade level.

With the addition of:

The children began the day together, led by student aides in morning exercise to “Ra-ji-o taiso”. The children then came to assembly and sang “Good Morning” in Japanese, exchanged greetings and heard an overview of the day’s lesson and activities. The Program Director presented the lesson of the day such as, “Who are my ancestors?”, “Developing an awareness of my cultural heritage”, “What were the cultural treasures the Issei brought to America”, or “What were the Issei and Nisei experiences?”

Each group met with its group leader. The leader expanded on the presentation by the Program Director. Typical activities were learning simple expressions and usage of the spoken and written language; exploring the cultural heritage through study of traditions, festivals, folktales and symbols; relating history and experience of immigration, evacuation and reconstruction; and preparing for field trips with background information about significant points of interest.

Each group participated in physical exercise and recreation, such as, folk dancing and games. Activities such as double geta (wooden clog), and ohajiki (flat marble game) provided opportunities to use language for expressions and counting. It also gave the children time to interact socially, develop friendships and encourage teamwork.

Once or twice a year, field trips were planned for the entire family to visit various historical and cultural sites such as Angel Island, rice mills, a koi farm, and Okei’s grave site at Gold Hill.

The Gaku Gei Kai program culminated the session with students performing songs, dances and plays for family, friends and community guests. Students  annually performed at the two senior citizen nutrition programs and as requested for fairs, conferences and other events.

Undokai (Japanese Sports Day) typically occurs the first Friday of Gakko and is held at William Land Park. The kids compete in many different events such as the bean bag toss, three-legged race, tug-of-war and balancing acts just to name a few. The end of the games finished off with some tottemo oishii bento’s (really tasty plate lunches).

Mary Tsukamoto…
“Upon retiring in 1977. I was asked to be Director of Gakko. How could I say no. This encounter became a profound influence upon my life. It was a crowning experience that clearly defined the path I would walk for the remainder of my days.  Japanese magazines, assessed my collection of Japanese dolls, organized charts and pictures, and put together a huge collection of realia and visual materials. This collection is now part of the Japanese American Archival Collection at California State University, Sacramento.   I was so impressed with the young parents who brought their clear vision, special skills and intelligence into this pioneering  program of cultural heritage. They organized, adapted, innovated arid creatively forged ahead, sparkling with dynamic purpose  to make a great idea become a reality for their children.  The parents and children challenged me to provide a balanced picture of the internment experience. One day, while I was telling the children about their wonderful, hard-working grandparents and internment experience, the children said, ‘You are lying! I can’t believe you. How could our grandparents be so nice and the government put them away unless they were spies or traitors?’  I was shocked and deeply shaken as I realized that my silence, anger and outrage, which were kept private for 30 years, was wrong. I had no right to go to my grave with this silent, unanswered question. The challenge was clear, to speak out about the experience and issues of internment and to become involved in advocating and educating the public for the passage of Redress.   Thus I personally found my own roots, through Jan Ken Po Gakko.”  —Mary Tsukamoto 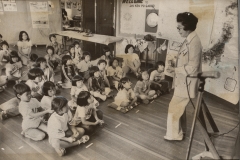 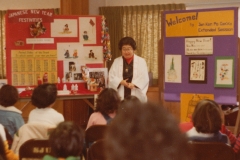 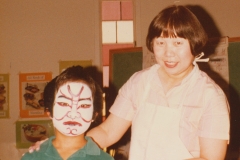 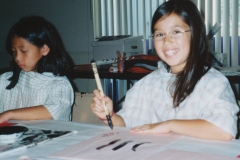 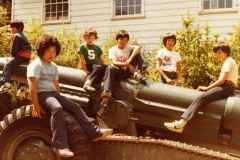 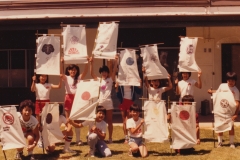 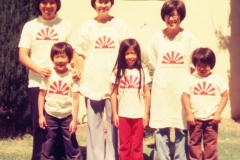 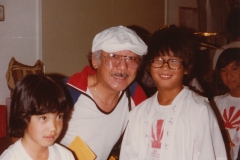 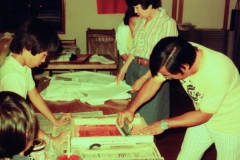 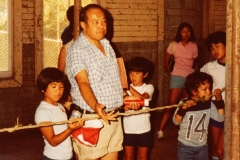 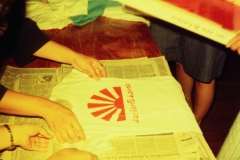 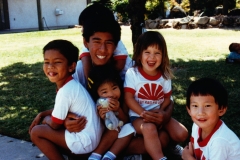 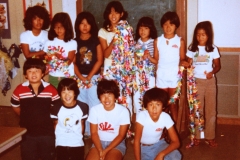 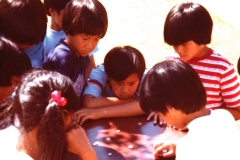 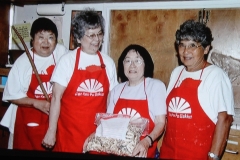